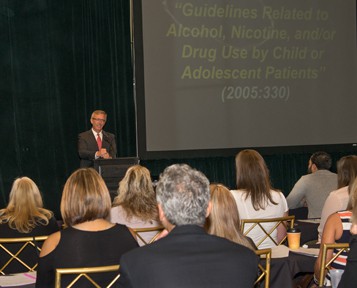 Attendees for Dr. Harold Crossley’s sought-after course on street drugs were met with a surprise visit from Congressman John Katko.  Mr. Katko spoke about his commitment and efforts in Congress to end the opioid epidemic in our community. His comments echoed those of Dr. Crossley, and the two seemed to hit it off well.  Dr. Crossley even gave the congressman an honorary ADA “medal” he proudly wore for the rest of his visit.  After questions were fielded from the audience, Rep. Katko was escorted upstairs to the exhibit hall to see the exhibits and take some photos with leadership on hand.